Have you ever regretted volunteering for something? That’s the position in which I find myself this week.

As a member of the homeowners’ association board, way too much of my time is currently spent trying to navigate the petty disputes that constantly crop up between neighbors.

While I’m sympathetic to the concerns being raised on both sides of the latest kerfuffle (and deeply grateful to my fellow board members who share this thankless job), I am bone-tired of trying to be mom/cop/shrink/legal interpreter to a bunch of adults acting like whiny children – especially since I’m only actually qualified in the first category. Arrgh.

In between e-mail barrages, phone calls and meetings, I’m putting the stress to more productive use by pounding some dough.

My weapon of choice!

Current baking challenge: the definitive buttermilk biscuit. Two recipes down so far, each pretty good but in need of adjustment.

Plus, more decisions to make: Cookie sheet or cast iron skillet? Butter, shortening or a combo? Baking soda as well as baking powder? Rolling pin or flatten by hand?

At least they don’t talk back.

If anyone has a recipe they love, please share! xxxx 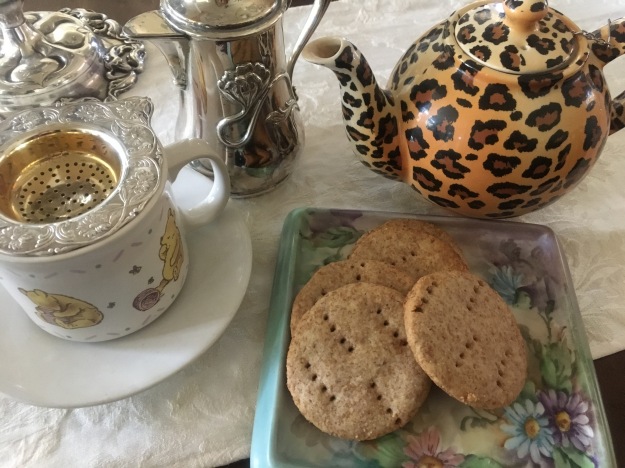 This week, I was inspired to bake up some digestive biscuits – probably because I’d been watching “Victoria” on TV. They turned out beautifully and I became curious about their origins.

The first digestive biscuit (“cookie” in American English) was the McVitie’s Digestive, created in 1892 by Alexander Grant, a young new company employee. The biscuit was given its name because it was thought that its high baking soda content served as an aid to food digestion.

I was skeptical – and wondering how many you’d have to eat to get any benefit – but according to LiveStrong.com, “ Baking soda (sodium bicarbonate*) helps to break down fatty substances and food particles, making them easier to digest and calming the turmoil in your stomach.”

In any case, digestives are a delicious, light cookie made with mostly whole-wheat flour for a nice fiber content. I wouldn’t call them health food but when your sweet tooth is calling they probably stack up pretty well compared with other cookies. (I’m talking to you, chocolate chips!)

It’s easy to make your own, and the butter tastes better than the palm oil in commercial products.

Ingredients Click here for measurement by grams or ounces

YIELD: about 3 dozen cookies. Particularly delicious with a pot of freshly-brewed tea.

*In case you’re wondering: Baking soda has only one ingredient, sodium bicarbonate. Sodium bicarbonate is a base that reacts when it comes into contact with acids, like buttermilk, yogurt or vinegar. Baking powder also contains two acids.

A promotion in today’s e-mail made me ponder what qualifies as my worst travel experience. Usually, these fall in the Relatively Minor Irritations category: delayed luggage, missed connections, bad food, and so on. I don’t think any of the Merely Annoying will win this contest.

Then I remembered the Wish-I-Could Forget trip to the Caribbean with my then-husband (my ultimate “wish I could forget” experience, but that’s another story). Along with our 2 year old son, we  traveled to Nassau in the Bahamas for what should have been a restful week.

A couple of nights in, we decided to have dinner at the resort and accepted their recommendation for a babysitter. After a pleasant meal, we returned to our room, paid the sitter, and checked on the baby.

He was fine, but something just felt “off”.

Turned out, the sitter had slashed through our luggage and stolen everything that looked valuable including clothing and shoes as well as cameras, extra cash etc. The hotel manager was faux-apologetic, the woman “couldn’t” be located, and any thought of a relaxing vacation was hopeless.

I’d enter the contest and provide more lurid details, but what if they offered to send me BACK to Nassau for my do-over?? No, thank you!!

However, YOU should click this link. Good luck and let me know if you win!

Allure magazine has recently reported that they’ll no longer use the term “anti-aging”. It’s about time.

Since we’ve only got two options — getting older or checking out — there’s not much point in fighting the inevitable. Instead, let’s embrace some of the positives and enjoy being our best selves. 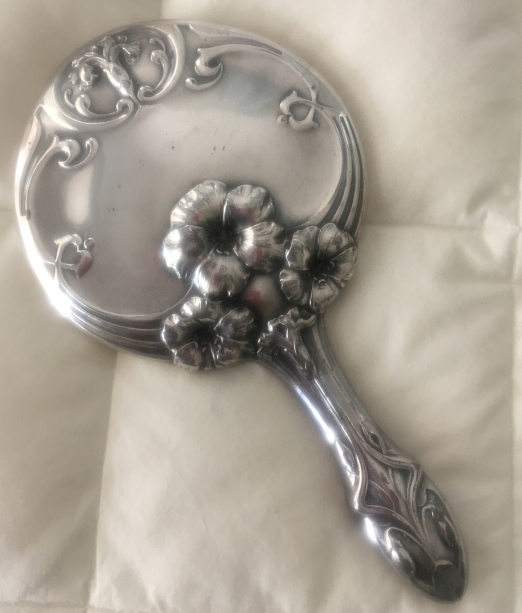 Antiques are so much more interesting than newbies!

1. YOUR DOUBLE CHIN DISAPPEARS. With the passing years, fat pads under our chins usually get smaller as our faces become less round. (Bonus: more visible cheekbones!) So if you’re considering a fat removal procedure in your 20’s or 30’s, you should probably wait.

2. YOU’RE HAPPIER. According to a study in the Journal of Clinical Psychology, happiness steadily increases from your 20’s to your 90’s as anxiety, depression and stress levels tend to go down.

3. YOU CAN WAVE GOODBYE TO THE BAGS UNDER YOUR EYES. When we’re younger, these are often fatty deposits. In older women, they’re more likely caused by fluid retention, which decreases as we go about our day.

4. SEX IMPROVES. Caveat: The study they cite in the magazine contrasts higher levels of satisfaction for women in their 40’s and 50’s vs. women in their early 20’s. Older women know their bodies better, are more likely to ask for what they want, and may be more spontaneous. (Note: no mention of post-menopausal issues, though.)

5. YOUR SKIN IS GLOWIER. Again, they’re talking 30’s-50’s, when moisture levels are highest and problems such as acne tend to resolve themselves. Moisture levels drop as hormones and hydration decrease, so 60+ skin often needs extra help.

6. YOU’LL SAVE ON WAXING. As testosterone dips in your 40’s, body hair starts to be lighter and thinner. Post-menopause, skin becomes thinner and waxing may be more irritating than a gentler process such as sugaring. Or, fuhgeddaboudit.

7. YOU’RE MORE OPEN-MINDED. A University of Michigan study found that women in their 50’s were more empathetic than those who were younger. Mature people may have strong opinions but we’re also more likely to understand other points of view.

For more thoughts on aging, plus a delicious cocktail recipe, click here.

A New Year’s Resolution: I will search for answers to life’s pesky little problems and share my finds with all of you.

Let’s assume that brute strength has not done the trick.  Here are some options:

2) Tap around the edge of the cap with a wooden spoon.  This should release the air pockets of the vacuum seal. It’s also less likely to shatter the jar than banging it on your countertop.

3) Still stuck?  Turn your jar upside down and place in a bowl filled with hot water. After about 30 seconds, the lid should loosen.

4) For sticky stuff (honey, molasses, etc.), plan ahead. Cover the jar opening with plastic wrap before you put the lid back on. (This also helps with paint cans.)

#2 How to quickly chill wine or beer

Uh oh — unexpected, thirsty guests have arrived! Wrap a damp paper towel around the bottle or cans and place them in the freezer.  They will chill much faster than without the towel. Do not forget they are in the freezer! (Yes, I have done this and then had to clean up the resulting mess.)

Calling all ladies, drag queens, and overly-enthusiastic lovers: If you’ve ever gotten lipstick on your clothes (e.g., on the collar as you pulled a blouse or sweater over your head, or on your sleeve as you brushed your hair) you’ll appreciate the following advice I found online.

After you stop swearing, act quickly and there’s a good chance you can salvage the situation and avoid a permanent stain on your shirt or reputation.

If all else fails, visit your dry cleaner.

A quick Google search reveals that the first use of “dry” cleaning (which is, in fact, a wet process using solvents instead of water) was to get stains out of togas. You’ll be happy to know that modern methods no longer use ammonia derived from urine, which was the ancient Roman method. Ewww.

Today, clothes are loaded into a machine that looks similar to a regular washing machine, and dry-cleaning chemicals are added. One of the most common solvents is tetrachloroethylene, aka perchlorethylene (“perc”), which has fallen out of favor due to health and environmental concerns. As a result, there’s been more widespread demand for biodegradable alternatives such as siloxane.

Finally, here’s a totally random hack I love: To shorten sleeves on a blazer or coat without tailoring, gather the inside sleeve fabric at the elbow and secure with a safety pin. Genius! 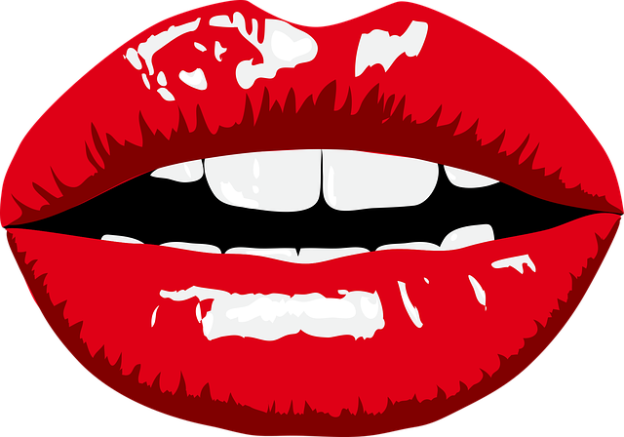 “As we get older, our hair should get softer and our clothes more structured.”

Words to live by! Layers of flow-y fabrics can make us look shapeless, while sharply angled, severe or stiff hair styles can be a harsh contrast to a softening jawline.

January brings with it not only the predictable resolutions (eat less, floss more) but also the sobering bills resulting from December splurges on gifts and entertaining.

If you love fashion, January can be a minefield of temptation. Below are 10 ways to trim your fashion budget this (or any) month, no matter your age:

Happy New Year, dear readers and fellow bloggers! And here’s hoping that 2018 is better than 2017 – a pretty sucky year worldwide.