If time has etched its passage with dark spots, broken capillaries and other evidence of sun damage, you may want to consider having a photo facial at your dermatologist or plastic surgeon’s office. I’ve been going every six months for a couple of years and, while it’s not what anyone would call a relaxing spa treatment, it’s definitely effective.

There are several different types of machines; each delivers targeted heat and light to pigmented areas. Stephanie, my esthetician, explained that her office uses BBL (Broad Band Light, made by Siton) because it provides a full range of options for true customization. Many other machines are pre-set, making them somewhat more limited.

Photo facials target the pigment in the skin to lighten areas of damage. The combination of light and heat also strengthens and builds collagen, the main protein in your body that supports your skin and diminishes over time.

Different skin colors require different treatment, and in fact African American skin, which obviously has the most pigment, would burn if subjected to pulsed light. The darker your skin, the more conservative your facialist will be with the setting. Pale and freckled skin like mine can tolerate the strongest heat and often has the most visible results because the initial contrast is so noticeable.

Make sure to discontinue the use of retinol a week before treatment, as it will make your skin overly sensitive. You may also want to stop using glycolic acid, although that’s less of an issue. I also recommend taking acetaminophen before your session.

When the session is done, Stephanie wipes off the ultrasound gook and lightly spreads on a soothing lotion. My face is a bit red and swollen, so I pop some oral arnica tablets and apply arnica lotion when I get home (make sure you don’t go near your eyes since the fumes are strong.) When more heat is used, the more swelling you can expect; it will subside after a few days at the most. Cool compresses help too.

Spots are darker immediately after treatment, but you can easily cover them with makeup. The first time I did this I was noticeably blotchy, especially on my hands; with regular sessions it’s not nearly as obvious. Don’t expect to see results for at least three or four weeks. The dark spots will crust over and fall off on their own. Meanwhile, be extra vigilant about using a broad-spectrum sunblock (at least 30 SPF)– which you already know you should do anyway, right? 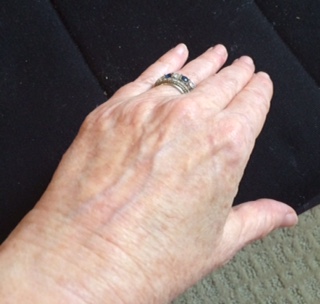 By the way, pulsed light doesn’t go deeper than the top layer of skin, so it will not affect fillers or other deep-layer injectables.

Don’t expect miracles and I think you’ll be pleasantly surprised at how nice you look with fewer of those nasty age spots!

2 thoughts on “Diary of a Photo Facial”

Reflection of My Journey

Drowning in the busyness of life, and how I stay afloat, and find peace and stillness amidst the chaos.

This is a Business, Wildlife, Environment and Technology Blog.

Wine reviews so good, you can almost "taste it" !

The Diary of a Country Bumpkin

Where Creativity and Imagination Creates Wonderful Ideas for Your Home!