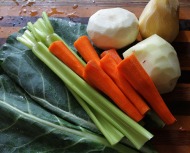 Photo by mali maeder on Pexels.com

As I write this, my DH (dear husband) is creating something he calls “Clear Out The Refrigerator” Soup. We’re at the start of a two-day cold snap, which calls for gloves, turtlenecks and something warm, comforting and low-calorie to eat.

Pretty much anything edible can be turned into soup.  In this case, we’ve been stockpiling withered vegetables, accidentally frozen herbs, and most of a large box of chicken broth. It either needs to become soup or compost.

Making soup couldn’t be simpler, even for you non-cooks out there.

Here, DH and I diverge.  He likes the individual tastes of the separate veggies in broth. I prefer using an immersion blender to purée them to a texture resembling pea soup.

Either way, simmer until the flavors blend, re-checking and adjusting your seasoning as needed. Add a hunk of crusty bread, some cheese and a glass of wine. Voilà: dinner!