After a whirlwind few days in Los Angeles (my husband had a work-related event), it’s nice to be back in Oregon.

The two places couldn’t be more different. So in honor of the recent primary, I’d like to share some observations. In the tradition of all the news shows, the following statistics are entirely made up:

Beverly Hills in particular is its own little world. It’s always fun to hang out, do a little cultural anthropology (i.e., shopping) and catch up with friends and family in the area. A few weekend highlights:

Discovered a wonderful Italian restaurant I have to recommend to you: Sfixio at 9737 Santa Monica Blvd. in Beverly Hills. We had dinner there on Friday, when the place was uncharacteristically deserted – everyone was apparently glued to their TV watching the NBA playoffs – so it was like dining at a very chic friend’s house whose husband happens to be an incredible cook. 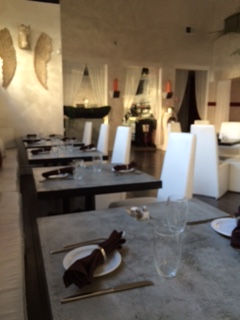 Mara, the hostess, hails from Milan and her husband, Chef Massimo from Florence, is the gifted visionary in the kitchen. The menu proudly proclaims that the restaurant has no freezer, and you can tell from the bright fresh flavors of the food that everything has been purchased and prepared only moments ago.

We ordered a lot (portions are comfortable but not huge) so we could share everything, including a luscious bottle of wine that Mara suggested. First up, a delicious artichoke salad of thin-sliced baby artichokes (hand sliced by Massimo; no fancy-schmancy mandoline for this purist!) and baby arugula dressed with a light touch of lemon, zingy olive oil and shaved parmegiano reggiano.

Our other appetizer was an eggplant parmigiana that will make you re-think all the gloppy Americanized eggplant parm you’ve ever tasted. Chef Massimo elevates this dish by simplifying its preparation. Super-fresh thin slices of eggplant are tender and flavorful with no hint of bitterness, sauced with beautiful, lightly seasoned crushed tomatoes and a luxurious helping of velvety burrata.

We followed up with a gorgeously fresh grilled branzino and a mixed seafood grill – again, skillfully prepared, deceptively simple and phenomenally delicious. No dessert, just some of Mara’s own homemade limoncello – also fantastic.

I’m no expert or even a serious foodie, but I’ve eaten some great meals around the world and this was one to remember. Can’t wait to return next time we’re in L.A. Check out Sfixio’s reviews on yelp and tripadvisor when you’re in the area. 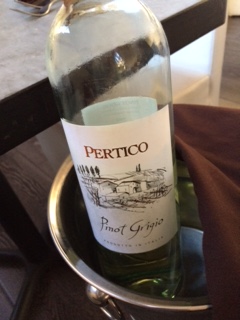 Above: the wine Mara recommended

Saturday, my husband was working and I had the day to myself. Surprise – I went shopping. One of my favorite things to do in Beverly Hills is roam around the department stores (Neiman Marcus, Barney’s, Saks), marvel at bad wind-tunnel plastic surgery, and eavesdrop on conversations.

The best snapshot of the day – a conversation I heard only part of – consisted of one woman telling her two companions about a couple she’d seen:

“…The bride and groom were on scooters, and they were both wearing Mickey Mouse hats and T-shirts. He had on black socks….” For the rest of the day I wondered if the newlyweds were on their way to the chapel, had actually gotten married in those outfits, or dress like this all the time. And, mostly, were these famous Mouseketeers or just fanatics?

Anyway, back to shopping. I “had” to drop by Hermès to check out scarves (you know how I love my scarves) and spent about two hours prowling around the store and chatting with my completely charming Belgian sales associate, Olivier. Should you be in the market for Hermès anything and happen to be in Beverly Hills, he’s your guy! 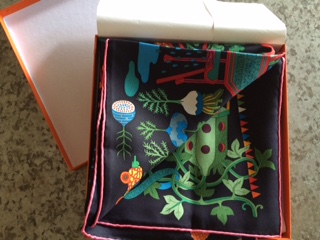 Besides being extremely personable and patient, Olivier shared interesting stories about the brand so I completely justify my shopping as having been an educational experience.

I learned, for instance, that every bag comes with an assigned box and even if it’s dented or imperfect they do not have extras. This is, I assume, a very smart strategy to make sure nobody asks for one and then goes off to sell a replica purse in an authentic box. Olivier also told me that Hermès stores cannot order or ship bags (or anything? I forgot to qualify) unless the products are purchased in store. Every store maintains its own inventory so the sales associate can’t, for instance, look in the system and find you another color somewhere else. Who knew? Good thing there’s a website.

The rest of the weekend was spent socializing, checking out LACMA (the Los Angeles County Museum of Art) and the Getty Museum (both currently have exhibits of Robert Mapplethorpe’s photography including the S&M stuff), visiting with my daughter and her boyfriend who’d just spent time in Ecuador and Peru and, naturally, eating.

Ray’s/Stark at LACMA is quite excellent, especially for a museum restaurant. Check out their salad of black kale, grapefruit, golden raisins, ricotta salata and creamy lemon vinaigrette – or create it yourself at home. (I’m doing that later.)

Sunday night provided an opportunity to catch up with friends in our age group – a casual dinner for four in their art-filled downtown loft. After all the frou-frou of Beverly Hills, it was particularly refreshing to have a no-bullshit, down-to-earth conversation.

You know how when you’re younger, a friend might say, “Your hair looks great”? At our age, my friend says, “I love your hair color”. Because, who are we kidding… there’s no use pretending I come by these highlights naturally!

The conversation inevitably turned to the big issues: retirement, where do we all want to live, aging parents and our travel bucket lists. Our friends are off to Japan and Vietnam next week; after all the rushing around (and fighting L.A. traffic), we were happy to get on a plane and return to the land of flannel.